When light story is written by glass in a stained glass workshop in Lyon named Vitrail Saint-Georges.

Jean-Baptiste Barrelon (18th October 1818 – 31st September 1885) was born in a family of locksmiths that came from Saint-Chamond (Loire). He left school of fine arts and architecture of Lyon with honours gained thanks to a silver medal in Bonnefond painting course. After a some year stay in Paris where he became a student of the painter Charles Gleyre (1806 – 1874) (Gleyre Marc-Gabriel trained students such as Renoir, Monet, Sis­ley), he attended from 1875 training in the painter-glassblower Alexandre Mauvernay workshop (1810-1898) who worked in Saint-Galmier (Loire).

Seven years later, he found a partnership with Bessac and the painter Joséphus Veyrat. Then, he set up his own business in Grigny, around ten kilometres from Lyon. Such partnership disbanded eleven years later letting Barrelon the only one who has signed his name on stained glasses made since 1864. He realized every picture windows of the Church of Saint-Antoi­ne in Vaugneray (1864-1865) and he worked in Brindas (1871), Bully, Chaussan, Saint-Genis-Laval, Saint-Maurice-sur-Dargoire (1856)…

By 19th June 1878; when one of his employees named Georges Nicolas Dufêtre took over the workshop, Barrelon house extended the sphere of activity. In fact, he worked in several countries such as Irlande, Italia and eventhough it is far away, in New Caledonia. However, during his career, Barrelon kept being interested in what it was happening in his region. Moreover he produced a lot for Loire department but the West of Lyon did not lack of stained glasses issued from Barrelon workshop. In fact, they are still there.

Georges Dufêtre who has been one of Barrelon employees (since lst February 1864) became officially his successor in 1885. However, in 1977, while he was still working for Barrelon, he made every stained glasses of Messimy. Barrelon accountancy records details of invoices adressed to Mr Blanc, the priest of Messimy. The same thing occurred regarding stained glasses of the Church of Orliénas made in 1875. In 1885, this time by his own, he painted most of stained glasses of the Church of Saint-Laurent-de-Vaux, of the Querbes instition Chapel in Vourles, of Beaunant (actually disappeared) and some picture windows in Sarcey. In contrast with Barrelon production, Dufête production took place in an unfavourable period due to the end of big religious building sites. In 1885 he left Grigny to live at 122 rue Saint-Georges in Lyon.

Paul Nicod took over the workshop in 1898. It was given customers notice of the event by circular letter dated on 24th June.  From 1901 to 1918, he worked in partnership with Jean Jubin. Jean Jubin was the brother of Antoine Jubin also named the Vagabond of the Monts of Lyon («le chemineau des Monts du Lyonnais») well known in the region. The latter dedicated a poem, «To my brother To Saint André (1) we see the apostle in his glassroof while the martyr is glorifying his noble cross, also to Riverie, Jean, a total of 3 stained glasses are framed in stone (2)».

Because of post World war (1914-1918) social and economic situation, Paul Nicod, in 1919, thought about a meeting with his fellow members and sent them a circular letter in which he said for example, “… Everyone and everybody have suffered from issues caused by the recent events that have to be fixed as soon as possible. Everywhere States and people join their skills and knowledge; do not you think that our small glassblower-painter-master corporation of Lyon could similarly play its part in such building? In that case, please attend meeting to discuss our corporation interests in order to improve our life and the one of our partners and workers…” The proposal seems to be well welcomed regarding the total of favourable answers he received (4).

Around 1936, the workshop was taken over once again by Joséphine Lamy Paillet. This woman was a painter-glassblower and dedicated 20 years of her life to the stained glasses of Saint-Bonaventure. She also made stained glasses in the Churches of Sain-Bel, Sarcey and Saint-Pierre-la-Palud.

In 1979, Joël MÔNE (http://www.mone.fr) became Mrs Lamy-Paillet friend due to a meeting on a stained glass project that only saw the light of day 30 later, after the backer death thanks to his Last will and Testament. He learned years after all the know-how passed down by Barrelon. He learned trained by his heritage and created Vitrail St-Georges workshop, a name that reveals the character and the location of the workshop (Vieux Lyon). As a matter of fact, the workshop was set up at 52 rue St-Georges (Lyon 5th) then, in 1990, it was removed at 21 quai Fulchiron to find a bigger place.

Is it possible to work transparency and perspective at the same time? No way according to glassblower masters Joël Mône met. Such challenge teased him so he worked a lot to take it up and gave birth to a new stained glass approach: “the perspective of transparency”. To do so, he emphasizes the role that colour and light combined with lines’ game play. When colours are well balanced, Joël Mône can achieve to create perspective and relief while maintaining the intensity of light that defined Middle-Age stained glasses. Consequently, we can see stained glasses that remain transparent in comparison with those of painters-glassblowers since Renaissance.

This is why, in 2007, Joël Mône published, as an author, a book entitled «The perspective of transparency». He explains in details his train of thought and his technique work.

Nowadays, we can find Joël Mône creations in Rhône-Alpes region as well as in Japan, Singapore, Canada, Spain, Cambodia and so on…

Furthermore, the story is not going to end as for the first time; since it has been originally created by Barrelon, Vitrail St-Georges workshop (owned by Joël Mône) is taken over by his son named Jean, helped by his sister named Cécile.

It is a nice way of perpetuating an on-going story, almost legendary, that became lately a true family matter… 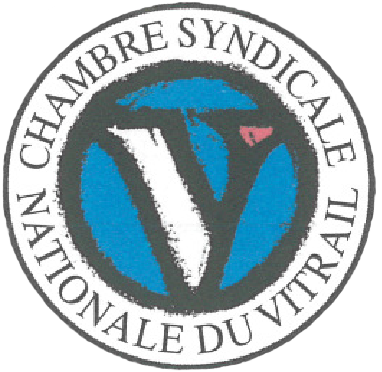